Suzy and I moved to Portugal in October 2020. It’s a very long time since I was last in the country and Suzy had never been before. Here are our top ten observations so far. 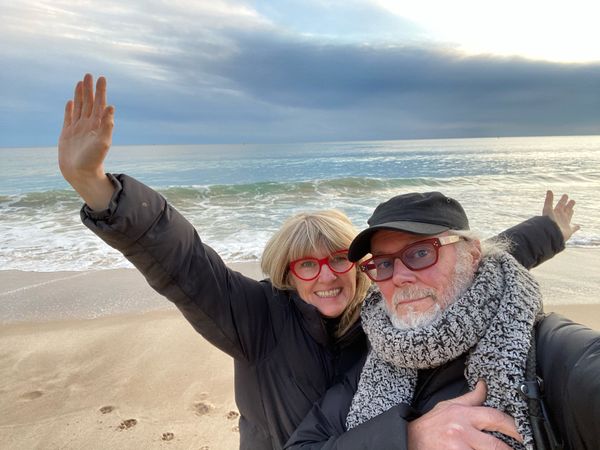 Stuff that you buy now is not designed to be repaired and generally speaking in the West we have become used to buying new. This is not the case in Portugal. There have been many instances where people have actively repaired stuff for us even though they would have made more money by selling us new which fits with our ethos and our pocket.

Portugal is not cheap! We lived in Spain for four years at the heady heights of the GBP/EU exchange rate being around 1.3-1.4 and we found it relatively inexpensive to live. Of course, now the exchange rate is around 1.14 which makes a difference, but even taking that into account prices seem to be around the same as Germany with supermarket shopping here more expensive than England.

Electricity is hellishly expensive. The ‘Quinta’ (small-holding/farm) we rent is single-glazed and not insulated, the only form of heating being three fireplaces, one of which we cannot use as it’s in the studio where we run a big, old school, analog mixing console and host our musical menagerie. Therefore, we are using electric fan heaters as our main source of heating from December-February. We await the next bill with trepidation...

Motor vehicle tax is cheap. Water, mobiles, internet, bottled gas (we have a Propane gas hob, which as the cook of the house makes me go YEAH!!!) are all around the same price as Germany. Compared with Germany, rents are expensive but cheaper compared to the Isle of Man and England (especially the closer you are to a major town or city).

So all in all, you don’t move here for a low cost of living.

The Iberian peninsula has a very strange system with respect to electricity supply as your ‘standing charge’ is based on the maximum amount of electricity usage you predict. This is known as the ‘potencia’, which if exceeded, the meter cuts you off for 30 seconds or so. The second strange thing is that most properties have a three-phase supply and combined with the potencia issue above, does cause complications.

We are contracted for a potencia of 20,7Kw and not wishing to become too technical, this means at around 220V the total current we can demand before we are cut off is around 94A, but across three phases - 31A per phase. Now all you electricians can really freak out as all three phases are present in the house and in adjacent rooms.

In the UK, Germany and most other countries we have lived, you have 100A single-phase supply, so if you decide to have on a 3Kw electric heater, boil the kettle and cook the Sunday roast in an electric fan oven all in the kitchen it’s no problem. Not so here as this exceeds 30A for the kitchen phase and ‘boom’ the supply is cut off.

The result is we now have to balance the load across all the phases, which, in a commercial situation is normal, but bizarre in a domestic scenario.

There is nothing quite like fresh produce from a country with a Mediterranean climate: everything veritably zings with flavour and tastes like it has been raised by the sun!!

My first article from Portugal 'The fixer' talks about the importance of great local contacts and we were very fortunate to bump into Neide, a lovely lady who lives down the road, when we were passing the local social / community centre. After meeting for the first time, she offered to drive us around the district showing us all the places of interest to ‘newbie’s in the area. The whirlwind tour included bars by the magnificent river Tagus, cultural landmarks, health centres, wonderful food shops and the best place to buy pastel de nata!! Delicioso!!

One of these independent shops is Mercearia Casca D'Alho owned by the wonderful Christina and Vasco. They supply superb produce and on Saturday morning invite local farmers to set up stalls at the store. In addition to this, Vasco travels to the market in Lisbon to buy fresh vegetables daily (apart from Monday). The shop is always busy and even though a tad more expensive than the supermarkets (boooo), the quality, friendliness and being able to support and be a part of our local community is worth every cent. 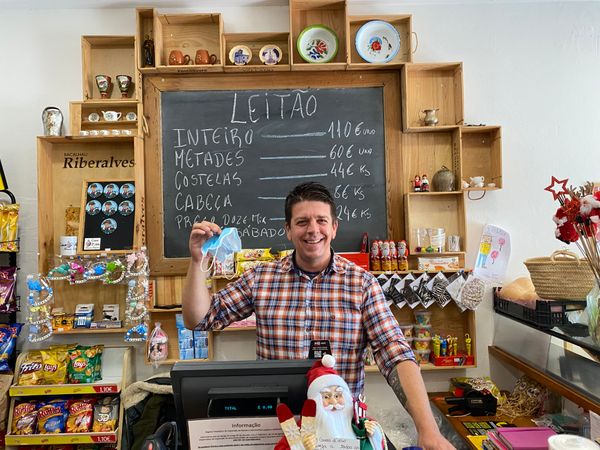 Restaurants are not as cheap as you would expect with a Prato do Dia (menu of the day) costing around 8-10€ (which includes two courses and wine). A 20cL bottle (mini) of Super Bock or Sagres beer will knock you back 80c. You drink from smaller bottles - mini’s / quinto’s in hot climates to ensure your beer stays cold and doesn’t heat up before you have time to drink it! Wisdom!

The wine is sensational, but again for a good bottle, not cheap. I certainly rate it alongside French wines, followed by Italian and Spanish.

We have visited countries all over the world and resided in six of them. Ever since we arrived in Portugal, Suzy and I have been shown nothing but love, respect and friendship.

Having travelled extensively we have also seen dramatic differences in the attitude of the police. So far here, we have had no problem. A few weeks after we arrived, we were at a junction in our old ‘Van of Rock’ trying to turn the wrong way onto a busy road. A police car stopped opposite us, the officer smiled, shouted and indicated it was wise to turn right rather than cross the road and waved! We were surprised! Great!

Due to the pandemic, we have not managed to interact much with our local community but have found great love and support in our local bars and restaurants (see my previous article, 'The fixer'). I am sure we will find a pile more cool people locally once everything returns to a semblance of normality.

One great moment was when we first met our friend Neide (see 'Food' above). We were out walking the girls in the evening and saw some ‘action’ with the lights on in the local community centre, so thought we would take a ‘masked up’ look in. Neide, who is the current President of the centre, saw us and came outside to say hello and was really friendly and, to our surprise, speaking fluent English which really helped when you have only just started learning Portuguese. Neide explained the centre was closed but was there to meet with the head of the Civil Defence who rocked up looking like Gary Oldman in a ‘goth style long frock style overcoat - one VERY cool looking ‘homem’! We all made an instant bond.

The sun shines from within the people of Portugal - that’s all.

Cold and damp are two words you would not expect to see written in an article about Portugal but it’s true, the winter feels grim.

Suzy and I arrived in October when the weather was warm and sunny but towards the end of November things started to change and by the end of December the nights were cold.

We are located around 40 minutes northeast of Lisbon on an alluvial plain in the Ribatejo region and have been told that this winter has been colder than for many years with a minimum of -3C at night and 12C in the day. On paper this doesn’t look too bad but combined with the fact that houses here are not designed for this type of weather and our ‘Quinta’ does not have central heating, we’re almost into double-figure layers for Starlite plus hot water bottles and multiple blankets at night.

The key is humidity control and now have two powerful dehumidifiers (supplied by the excellent German company TROTEC) which regulate the relative humidity to around 55% which is more comfortable and the four of us (with Bobby and Hummock our hairy beasts) hole up in the studio with electric fires, dehumidifier and console generating heat. We await the electricity bill for January with trepidation…

Having said that, there have also been some glorious days in December and January where we have lunched outside. But it’s true, it warmer outside than in. Learning a new language is always tricky for me.

The longest time we have spent outside an English speaking country was in Spain where I managed to get to grips with the language but incorrectly thinking it would be some use in Portugal! There are some similar words but it is fundamentally different, so it’s back to the drawing board. One big issue is that there are very few online translation/learning programs for European Portuguese. Online learning/apps favour Brazilian Portuguese as there are around 211 million people as opposed to 10 million European Portuguese and for the first few weeks we were unknowingly learning the Brazilian version.

We are waiting until we can take lessons which the Government provides at local schools across the country however many people speak excellent English. But, we are now resident and I am determined to learn so it will be a case of back to school when they start up again. 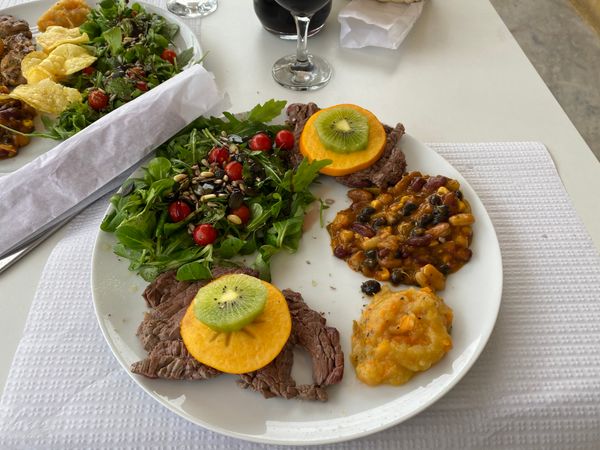 There are a few very odd things about doing stuff in Portugal which, if you’re thinking of moving here, you need to sort immediately. A Portuguese mobile number (as all the important websites require one / or operate two-step authentication) and a Numero de Indentificacao Fiscal (NIF) number (tax identification number). Without these, you are screwed.

Once these are up and running you can progress rapidly with most bureaucratic processes. It is true that the rules can be interpreted in different ways by individual civil servants, but we have found virtually all the processes pretty straightforward. An excellent source of information for British Expats in Portugal Facebook group where there are files pertaining to virtually everything.

If you become resident there are certain time limits to sort the process totally and these are available from this group but one point really stumped us when we moved. It is illegal for a Portuguese resident to drive a car that is not registered in Portugal. If the police or customs and excise catch you, the vehicle can be permanently impounded - yes, that is a fact!!!

There are just over 10 million people in Portugal with the majority living in the metropolitan areas of Lisbon and Porto, so out in the countryside, it’s pretty sparsely populated.

Due to the restrictions, we haven’t been able to explore the country as yet but what we have seen has been beautiful. We live on a plain but a few kilometres away you are immediately into rolling hills or the dynamic Atlantic ocean.

It’s remarkably green considering the climate statistics but of course, the whole country sticks out into the ocean and hence has a different pattern of weather to Spain and the east. The Atlantic coast is stunning, more fresh and dramatic - quite different in feel to the Mediterranean, which leads to the obsession with surfing here!

Looking at my first observation you would never expect that Portugal was really at the cutting edge of technology? I suppose it’s a product of being held back until the ’70s by the political regime but the country seems to have sidestepped the rollout of broadband by copper wire moving instead straight to fibre which seems widely available close to big cities. We enjoy astronomical speeds of 120mbps both up and down. In addition to this everything is online and usually available in English.

So, that's it. I hope you enjoyed this whistle-stop top ten!