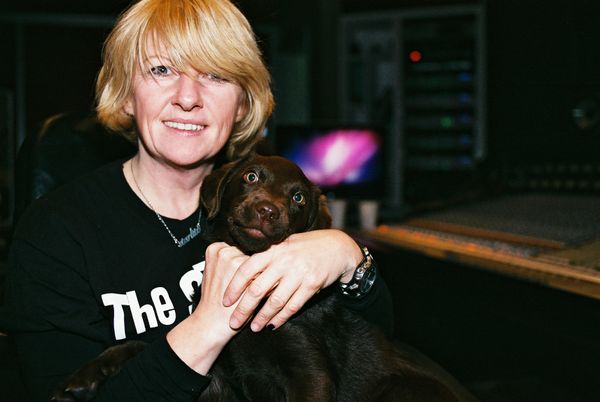 When I moved to France a year ago with my new partner Simon, he brought with him the mighty hairy princess, Hummock Campbell

We loved our new life together in the French countryside surrounded by vineyards and oceans of sunflowers for Hummock to run through but after a few months, we realised that she was becoming a little sad when Dolly, her furry friend next door, didn’t come out to play.

So we tentatively started discussing the idea of getting a second puppy. Simon had only ever had one dog at a time but I had grown up with two Springer Spaniels chasing each other around. That wasn’t the issue. Just like many other people I know, having a dog is a huge commitment and frankly, I was scared of losing my freedom. Hummock was definitely Simon’s and it was the only way to balance our family unit if I were to take primary responsibility for a new hairy beast.

A deciding factor for us was our job. If at any point Hummock couldn’t come with us because we were on the road or playing gigs out of town then it would be better if she had a little brother or sister to hang out with.

So, to test the water, we sent a quick e-mail to Dom and Jan at High House Labradors enquiring if they were going to have any new puppies in the near future. Within a couple of hours they wrote back a little shocked at the serendipity of our timing because Hummock’s Mummy had just had a surprise litter of one!

Simon and I looked at each other in amazement – a real jaw-dropping, big-eyed moment!
That was it then!

We were scheduled to go into the studio for three and a half weeks at The Chairworks to record Simon’s new album ‘The Knife’ and the Electrolite EP so we knew we could get to Cumbria in the van of rock to pick our little girl up at some point.

It was a brave or foolish move, but we ended up collecting Bobby the day BEFORE we went into the studio!

She was everything and more that we could have dreamed of!

Simon’s producer Andy Seward (Martin Simpson / Kate Rusby) took it well in his ubiquitous Northern stride. Drummer Keith Angel (the Angel Brothers) was just like his name and when Christian Madden (Liam Gallagher, The Earlies) rocked up for his session he was both comedic and gentle with the ‘Fearsome Bob – heart of a Lion.’

Yes – her barking pierced through acoustically treated doors just when we were trying to sensitively record guitars or vocals, yes – when over-excited she left puddles of delight on the floor, yes she looked so cute it was hard to leave her in the next room and focus on our work…

and YES, she melted my heart, from the very first moment we met.