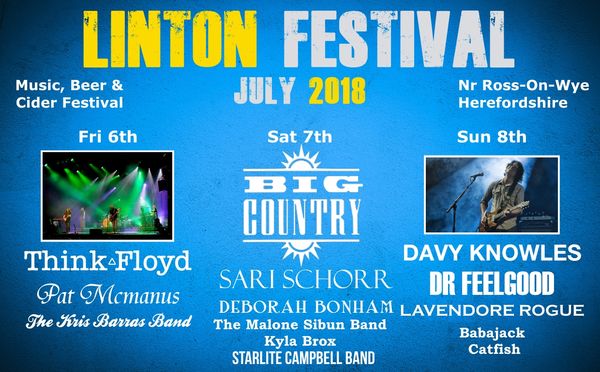 The full band will be playing featuring:

The Linton Festival was started in 2001 when some of the regulars of The Alma Inn, Linton, (near Ross-on-Wye) in the outstanding beautiful countryside of Herefordshire, realised it would be cheaper to get a band to come play at their place rather than hire a mini bus and drive all the way to Dorset. So instead of having one band, they thought “what the hell?” and so booked the whole weekend and got the beer in.

This festival is particularly special to the band as Starlite was born in Ross-on-Wye - a wonderful homecoming where the band will be playing music from their worldwide critically acclaimed debut album 'Blueberry Pie' plus music from Campbell's first two solo albums and new material.

Tickets for Linton Festival are available to buy here.

Following multiple warm up gigs on the Isle of Man, the Starlite Campbell Band will also be touring Australia later in the year, which includes a major International Festival (details to be announced) followed by a two week UK tour which includes dates at the Tuesday Night Music Club - London, Saltburn Blues Club - Saltburn, The Iron Road - Evesham, The Cluny - Newcastle and The Met - Bury with more to be confirmed.

** Also, for one night only, the band will be playing a special one-off 'Power-Trio' warm-up gig at Bristol's famous venue The Mothers' Ruin on Thursday 5th July, 2018.

Tickets for this special Bristol gig are available to buy here.

Hope to see you on the road...