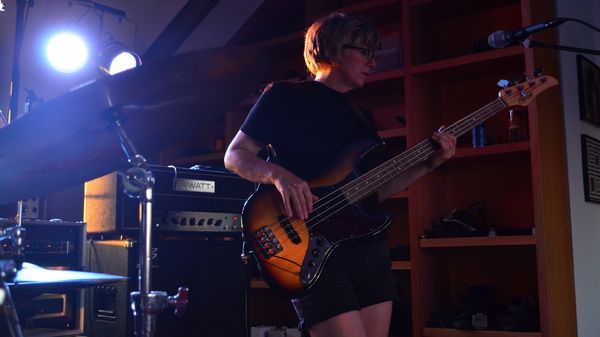 The hardest part about playing a new instrument is trying to work out what direction to go in and really where to start.

When I decided to play the bass guitar this problem was promptly taken away from me as I was thrown into a bath of ice-cold water overnight, becoming the bass player in Simon Campbell‘s solo band – faced with learning the parts from his albums ‘ThirtySix‘ and ‘The Knife.’

I knew all the songs really well having played keyboards live (and of course Simon and I are married), but the bass is a whole different badass world.

The bass player on Simon’s second album ‘The Knife’ was Andy Seward; one of the best bass players in the UK acoustic scene.

Listening to the complex and interweaving lines terrified me!  But fortunately, we have the isolated bass tracks from the original recordings and I went about learning everything. All I had was the music; there were no tabs or charts so I did it the old fashioned way – by listening.

A few days later having finally managed to work out the bass line, I quickly discovered that it wasn’t just a matter of identifying the notes but also working out where they are played on the neck and what shapes to apply to ensure that my technique was correct to allow my playing to flow smoothly. It was definitely a process of trial and error – sometimes, my fingers ended up in a right sticky mess, like a game of Twister, having made things far too hard than they needed to be.

And so it continued, week after week, listening and writing and practising. I became totally hooked; to the extent that I would wake up with bass lines running through my head… until it was time to rehearse with the band.

You never feel that you are quite ready, always wishing for more time but that was simply not an option! In retrospect, I have to admit that I have learned so much more by getting out there and performing live as opposed to staying home, hidden in my room, trying to perfect my craft!

Next week will feature some of the great players that I have been studying with some Carl Radle and Andy Fraser action.